When Jose Mourinho returned to Chelsea last summer, there was just one key person involved in the preparation of the first team who needed an introduction.

The manager and his methods were of course well known at Stamford Bridge and assistant first team coach Steve Holland, goalkeeper coach Christophe Lollichon and first team fitness coach Chris Jones provided continuity from the preceding seasons. Returning with Mourinho were his fellow Portuguese assistants Rui Faria and Silvino Louro, who have been with him from prior to his first time at Chelsea.

However there was one new face in the backroom team as this season commenced, another Portuguese with a wide football experience from managing teams on different continents, including a national side. He first met Mourinho in the early days of their respective coaching careers, and joined him at Inter Milan where he assisted in the winning of the Champions League and domestic league and cup honours, and at Real Madrid where league and cup triumphs again followed.

His name is Jose Morais and his main role at Chelsea is coordinating the analysis of opposition teams, but his work has a wider remit than that. It is time for the official Chelsea website to find out more about this important member of staff.

‘I decided that I was more promising and could have a more proud career as a coach than as a player,’ says Morais as he recalls the moment close to his 25th birthday when he decided to end his playing days, instead concentrating on his fifth and final year of a sports science degree at Lisbon University.

A versatile player with good technique and speed, Morais played on occasions at full-back and winger, but mostly defensive midfield in a career that started at Uniao Leiria in the second division and took in other clubs and a spell in the army before ending at Penafiel in the first division.

A chance event, an invitation to a party at the University, opened his eyes to the possibility of studying sports science and learning more about football while a player, as well as fulfilling him intellectually.

Eventually, with concerns about how successfully he could play professional football and support his family in a problematic economic climate, he took the coaching career path.

‘I had to study for a while to make the application to the University and I committed myself to go into this course and I was able to succeed. I was lucky because one of the teachers in the University knew I was playing and invited me to work with the youth in Benfica where I was like an intern, paid just a little,’ says the now 48-year-old in very good English, one of seven languages he speaks. Some were picked up due to working abroad but English came as a result of study at an early age and watching films and TV programmes.

He speaks with passion about his sport but also his determination in life to find a field in which he could excel.

‘I did a lot of things Benfica liked, with my commitment and my capacity to innovate and reorganise. After one year they offered me a three-year contract.

‘I started working with the youngest ones but in the third year they created a second team that was already a professional team and I was a little lucky again because it was when Graeme Souness came to manage the club and brought a coach, Alan Murray, who reconstructed the youth department and was responsible for the second team. But when Souness left, in came Jupp Heynckes, the German coach and he wanted me responsible for the second team, which is like Reserves and Under-21s in England.’

When Heynckes left, a young coach by the name of Mourinho who had just left Barcelona was handed first-team affairs at Benfica and worked closely with the second team coach for a brief period before they both moved on.

‘I was one of the coaches who was closest to him because my team was meant to give players to his,’ says Morais. ‘I was the most helpful I could be.’

While developing Benfica’s youth, Morais coached Maniche, later a Portuguese international and a Chelsea player on loan in 2006. He also worked with Deco when he first came from Brazil and was in the second team.

‘I decided to leave Benfica and begin a management career,’ says Morais, ‘and I started at a club that is today in the first league but then was in the second division – Estoril.’

It was the beginning of a sequence of management jobs that have built up a bank of football knowledge.

A change of ownership at Estoril led to a move to Germany and lower division Westfalia Herne where an acquaintance was involved in running the club. From there he was invited to work in Schalke’s academy to teach the ways of southern European clubs, before it was back to first-team management at Dresden in the German second division.

Finding the club in poor financial health, he returned to work in Portugal at a couple of lower division teams and then, in 2005, came the first opportunity to take over a club in a top flight, first in Sweden and after one season, in Saudi Arabia where Morais worked for two clubs.

Tunisian club Stade Tunisien followed and then a proposal to go to the national team of Yemen back on the Arabian Peninsula.

‘I was supposed to stay there for three years but they had a bomb in the United States embassy and then a lot of political instability, not only in the country but also in the football federation,’ he recounts.

Morais was back managing the biggest club in Tunisia, Esperance Tunis, when he answered a phone call from Mourinho.

‘He invited me to work with him at Inter Milan and I said I have my bag already packed behind the door!

‘I said whenever you think is the moment, I will be there. The team in Tunisia was going well, in first place and we’d just won the North African Cup Winners’ Cup and Mourinhosaid if you think things are good for you there and you want to stay then no problem. I said no, no, this is something I have always dreamed about.

‘He told me that he had 2000 people that want to work with him but he had spoken with other members of his team and we want it to be you. You know how he motivates people. He made me feel important at that moment.’

Morais joined Inter Milan in July 2009 with Andre Villas-Boas leaving in the September to start his own management career.

‘I was a head coach before I started to be assistant and Mourinho said what I have for you is the area that Villas-Boas had but because you have this experience, you are free to control your time to fulfil that responsibility but you’re also very welcome in the training sessions to give the contribution I think you can give.’

It is a way of working that continued at Real Madrid through to this day at Chelsea.

‘My main responsibility is to make sure the manager has everything he needs to prepare for a game and inform the players about what they can expect. My passion is training but I think knowing the opponent is part of the quality of a coach. It is a complement to what I like and I do it with pleasure.

‘Jose never leaves anything forgotten. He takes care of a lot of details and because of that it is not easy work but to work with him is very good because you start to be aware of things you weren’t before. He made me a better coach that way.

‘It is not only me that analyses opponents. It is team work and I am co-ordinating it, and I like working as a team, I love to interact.’

Morais splits his time between preparation at Cobham, travelling with the team to games when his schedule allows, and watching each of our forthcoming opponents in person at least once. Senior opposition scout Mick McGiven and opposition scout Paul McGiven observe at other matches while James Melbourne, Christy Fenwick, Paul Quilter, Giovanni Cerra and Donna Newberry are the Match Analysis team who work in the video, data, visual reporting and presentation side of studying the opposition.

‘And Jose helps a lot,’ points out Morais. ‘He’s always watching games and sometimes he is the one coming up with suggestions and solutions, and we prepare a presentation in the way that he wants. He is doing a big part of this work and this gives me more confidence because I know what he’s wanting and how he thinks.

‘In the last five years there is so much I’ve learnt. Jose has been like a kind of mentor, a kind of professor and I don’t believe there is anywhere in the world where you can learn so much. You don’t have this in any school. This is why he’s definitely the best manager I know – his instinct, the way he prepares, anticipates, manages players, provokes them to perform in a different way. I can’t see this anywhere else.’

Clearly Morais doesn’t regret for one second his decision to join Mourinho‘s team of staff, and nor does he regret his boss’s decision to resume his career in the Premier League.

‘It helps to come to a club like Chelsea where there are special people, everybody willing to give their best, open to help you, committed, responsible, always able to give a nice word and a nice smile.

‘The supporters are amazing also – a fantastic atmosphere, enjoying and loving the game and they are just there to support. I can just say it’s fantastic and I’m really happy.

‘I was expecting a positive experience in England and this is what I’m having.’ 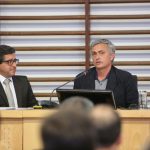 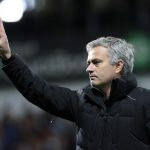