Assistant Professor at the Faculty of Human Kinetics University of Lisbon 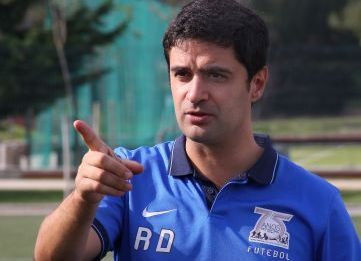 Assistant Professor at the Faculty of Human Kinetics University of Lisbon

Ricardo Duarte is Assistant Professor at the University of Lisbon where he coordinates the pedagogical soccer-related activities. He also currently works as an assistant coach at Vitória Futebol Clube (Vitória de Setúbal).

Ricardo born in the town of Barcelos, located in the heart of Minho region, in the North of Portugal. He is a passionate about soccer since his early years and due to the influence of his father. Alongside with his practice at regional level, he soon started helping his coaches planning and leading some training sessions.

At the age of 18, Ricardo decided to study Sports Sciences at the University of Trás-os-Montes e Alto Douro to become an educated soccer coach. There, he was fascinated to discover the fundamentals of sport training realizing, for instance, why the summer tournaments of ‘Futebol de Salão’ commonly empowered his ability and physical fitness for the preseasons.

During his degree he stopped his practice and started coaching some youth teams. Throughout the next 8 years, Ricardo was involved in soccer coaching at regional and youth national championships (U17 and U19) and working with Vila Real’s regional football association teams.

In 2005 Ricardo moved to Évora to be in charge of the soccer pedagogical activities in the Sports Sciences department of the University of Évora. During this 4-year period, Ricardo was also a technical coordinator of Juventude de Évora’s youth department and assistant coach in the club first team. He was also involved in various coach education courses as teacher/trainer.

In 2009 Ricardo was invited to move to the University of Lisbon to teach and coordinate the soccer pedagogical activities. At the same time he was doing the PhD in Sports Sciences, with a thesis entitled ‘Interpersonal coordination processes in Association Football: from dyads to collectives’.

In the last years he published several research articles in the top-tier sports sciences and sports medicine journals, including the Journal of Sports Sciences, Human Movement Science, Sports Medicine, PlosOne and others.

Nowadays, Ricardo is also supervising some master and PhD students in the fields of performance analysis and sports coaching. He is as well mentoring young football coaches and acting as consultant to some clubs and match analysis companies.

All session by Ricardo Duarte

Building your own career